Just over a month ago I planted my first ever proper mixed border, with suitably mixed results.

A lot of it looked and still looks great: the heuchera and hutchinsia have really settled in, and the iberis has responded well to dead-heading, sending up a dozen new frilly white mobcaps of flowers on each plant. On the other hand, the dahlias were almost immediately destroyed; the two anthemis died off far too soon, and the foxgloves didn't last much longer. In the past month, our containers have also started to show a bit of age: the violas have gone over entirely, and the petunias have got a bit straggly, with a lot of dead flowers on them. So everything needed refreshing.

What a coincidence, then, that I ended up at the Bridewell Organic Gardens open day today! They're a great local garden, volunteer-run and using gardening both as a work structure and also as a therapeutic location, to help people with mental health problems. They also have (very occasional) open days, at which they sell plants.

Sadly I'd already bought some pelargoniums and fuchsias (see below) so the only things left that I could feasibly take home in my pannier were a few herbs and spices: a Greek basil, a rosemary and a pretty little valerian. Out with the violas, and consolidate all our petunias into one easy-to-flop-over package: 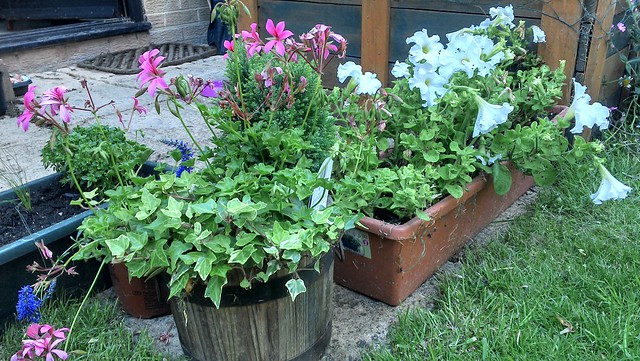 I didn't have the heart to bin them all while they were still flowering; and anyway that handily leaves us with some space in a separate container for the new herbs, plus two stipa tenuissima that were kindly provided to me by Gwenfar's Garden: 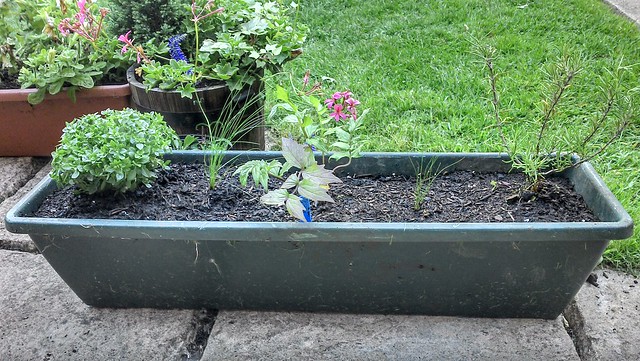 The pelargoniums and fuchsias I got from the plant supplier at Witney's Saturday market a week or two ago were used to fill the gaps left by the dahlias: 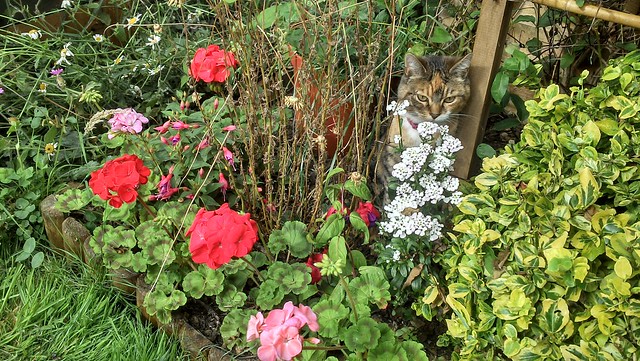 The cat, I hasten to add, is not a permanent fixture! The anthemis stems give a nice bit of structure to it all so I'll leave them there for now, I think.

The gardens at Villandry

None of the above is at all capable of competing with the amazing gardens at Château de Villandry, which I had the pleasure of visiting last week. Villandry is both a town in the Loire & Cher valleys and also one of the many castles that are dotted around this beautiful landscape.

The castle at Villandry is nice enough, but I went along for the gardens, which are amazing:

Pleasure gardens, a water garden, a sun garden, a herb garden, and a vast, box-bordered set of potager gardens growing fruit and vegetables. I spent at least a couple of hours there, and could've spent much more. By the end of it, every time I closed my eyes, all I could see was row upon row of flowers, hedges and trees.

Villandry is amazing, but on

Villandry is amazing, but on a totally different scale, and ethic, to your garden. No comparison. The border is coming along nicely, and Indie adds such glamour! So totally gorgeous. I'm glad to see the Stipa survived the train journey home. The containers don't look that bad. Maybe top up with some new compost and/or give them a feed, and dead head. The petunias & violas should last until 1st frosts as long as you keep dead heading them. I'm so glad you have got the gardening bug.

Oh, the violas were

Oh, the violas were definitely dead - maybe they just hadn't had enough water in the heatwave - but I could deadhead the petunias. The problem is that, once a petunia bloom dies back, it's quite tricky to work out what bit you need to deadhead exactly.... Maybe I'll just give the whole container a late Chelsea chop?

The stipa's great. I appreciate it'll need transplanting out of those herb boxes eventually, but I didn't want it getting lost in the border for a year. I think that at its current size it's a good match for  the structure of the miniature herb plants.