I collaborated with my old friends Torchbox on getting the new Chatham House website live on Drupal 7; I'm especially relieved that someone there did a great case study on drupal.org, so that I don't have to fill in all the details. Go and read that for broader details of the project build, and then come back. Please!

Chatham House were already on Drupal 6, although the build had grown quite tangled - understandably, over several years - and it was time to start afresh. Also, during my time at Torchbox, I built both:

These tools make it attractive to start any big "re-"build from scratch - basically a "build" without the "re-" - and so it felt like a great opportunity to move at least the content over from D6 to a completely fresh D7 build, and move forwards with a new, performant, optimized platform for Chatham House's future needs.

My involvement: D6 to D7 migration

My work revolved entirely around the Migrate and Migrate D2D (Drupal-to-Drupal) modules, extending these to suit both the D6 content, the D7 target structures, and also the tangles of new mappings and new information coming in from other sources during the transfer (typically from CSV.) 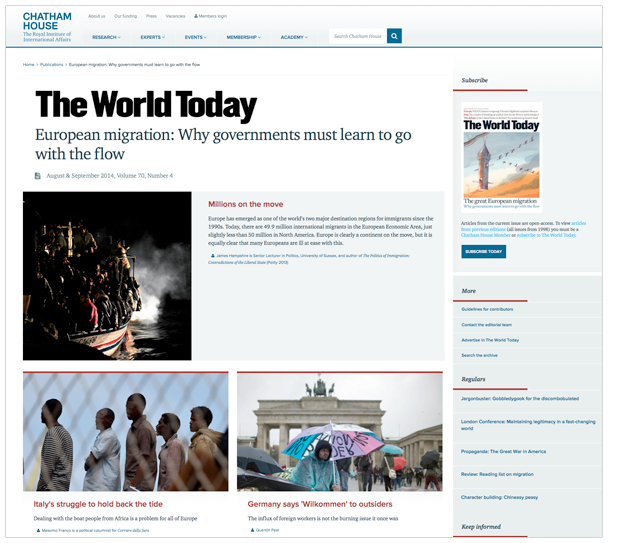 Sadly, my job was to implement the very guts of the content migration process, which means that on a good day I would usually spend a long time staring at screens that looked something like:

Other days - most days, in fact - all I would see all day would be the command prompt, multiple copies of gVim, and - if I was lucky - the cat.

Generally, Migrate and Migrate D2D were good to work with. They handled rolling migrations fairly well. The metrics were occasionally useful, although we didn't bother with the field-by-field metrics, as all migrations were checked by eye anyway.

One thing I would recommend is running the migrations from the command prompt using the excellent Drush commands bundled with Migrate: this was less prone to browser-based interruptions, and occasional glitches in the metrics (sometimes metrics came out with negative values in the "unimported" column if migrations were run solely from the browser!)

Some of the trickier problems included:

I could go on for ages about these problems and how I solved them, but maybe the best thing is for interested parties to just ask me in the comments.

Using Migrate, rather than upgrading a Drupal site in situ (see here for how to use drush sup to do that very thing) was a good way of taking advantage of improvements in D7, rather than having a D7 site that was wedded to understandably dated ways of working.

Media, Features and Display Suite were all improvements that could rapidly be taken advantage of, before you even consider Torchbox's custom install profile and tools. Besides, a lot of the old D6 cruft only made sense in the context of old D6 custom code, which the project determined to clear out in favour of doing things the right way from the outset.

Migrate and Migrate D2D provide a good framework for building D6-to-D7 migrations, and were often helpful in reporting what had gone wrong, if only to move your development back onto the right track. But documentation is quite fragmented, and so experience pays dividends. Expect to build a lot of object-oriented PHP code if you go down this route yourself.

Still, the end result is fantastic, thanks to the frontend and design teams that worked on it. And migrating just the content, and making it D7-shaped along the way - rather than being tied to the old D6 structure - meant that the frontenders were given wings to fly, which (I think it's fair to say) they jolly well did.

Did you have to handle

It's not at all clear what

It's not at all clear what you mean by "migrating taxonomies": do you mean migrating each vocabulary "container" for the terms, or the terms themselves? Your link is also broken.

If the former, then no, because there was only half a dozen vocabularies and they were quick to set up in D7 (also, they needed to be rearranged). If the latter, then yes. To migrate terms, you can either:

All of this, by the way, has nothing to do with where the database is stored (remote machine or otherwise): that's handled at a completely different level. If you've managed to get access to the data at that lower level, then Migrate doesn't really care where the data is coming from.