There was enough gardening happening this weekend I think, to warrant another occasional gardening post: especially as July/August are meant to be quiet months in the garden: or so I've heard....

The first thing that happened is that Cogges farm had one of its regular Big Digs, where one or two dozen volunteers descend on their traditional Victorian walled garden and help keep it producing crops to offer to visitors in return for a donation.

John, Paul and I weeded, dug, raked and watered a sizeable area of ground, and then planted around 150 leeks of the types "Heather's Purple" and "Kelvedon King". The soil quality was such that "just watering them in" worked fairly well, although a few flopped over, and one or two were actually pulled out when we moved the board along for planting the next row.

I tried - twice - to take a picture of them in their rows, 15–20cm apart, but was thwarted by my technology each time. Still, going back today to try again did at least mean I could re-water the site, as it was bone dry despite today's sudden rain showers. 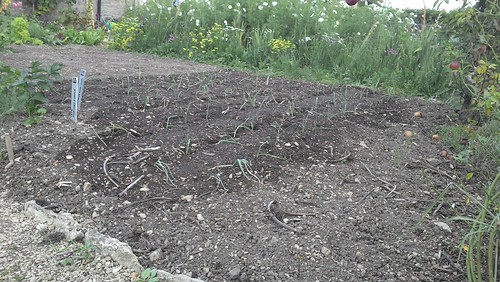 (I have a suspicion that the former cultivar has actually been bred by our resident legume expert Heather, as I can't find it online, but others might know better!)

I also took some cuttings of our wonderfully weird semi-succulent Pelargonium peltatum "Mini Cascade Pink". Because Hilltop had labelled it as a geranium, we never thought we'd have to bring it in. That means we ended up planting it too close to an ivy and a dwarf conifer, so the only way to separate any of it from the tangled (if attractive) mess was to take cuttings.

Here's a photo, taken mostly for my own benefit so I can tell when they've put on reasonable new growth: 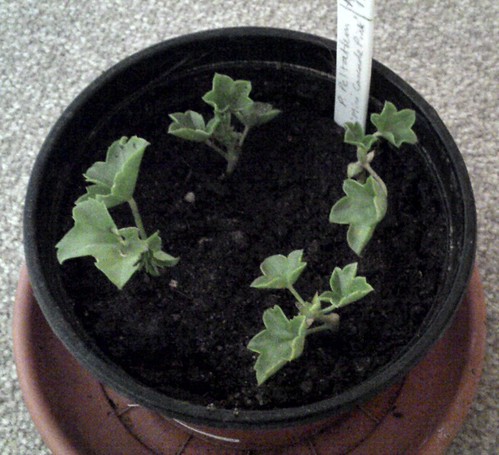 These are the first "real" cuttings I've ever made, where I've tried to take heed of recommended practice at every stage, and where I've got a clear goal in mind. Kate's taken a successful rosemary cutting in the past, and in fact when I first got this particular pelargonium, a bit snapped off and I sheepishly stuck it in the soil: where it promptly took root, which bodes well. But that's not quite the same as committing some small time and effort, and a following a defined procedure.

I scoffed somewhat when this instructional video began by saying "one of the most exciting things about growing geraniums is taking your own cuttings", but it really did feel like a minor milestone. Now, if only they root, it'll feel like one successfully attained!

Finally, I trimmed next door's front hedge, where it overlaps on our driveway. We've got an agreement that I do this bit, as it means I can do it whenever is convenient. Also, this year, it meant I could wait for most of the shrubs to flower and go over, so there was plenty of food for the bees.

I should've taken a "before" photo from the front door, but here's an "after": 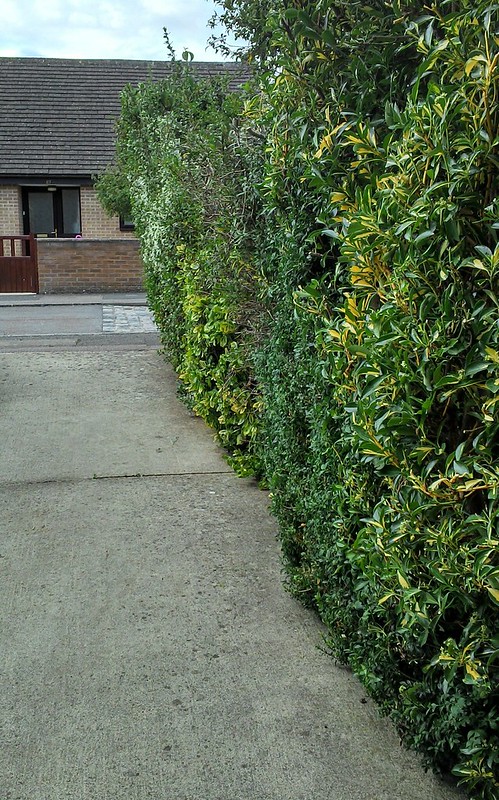 To give you some idea of what the "before" was like, this area was completely full of shoots, and I basically filled an entire green bin! There's still some fruit on some of the bushes towards the back and at the end of the drive, so I've left them shaggier there for birds in the autumn. I'm not completely sure what kind of berry it is, but it looks a bit like big elderberries.