Some winter gardening on a sunny January day

Around the solstice is a weird time of year in which to have effectively two gardening blogposts in a row, but I hope long-suffering programmer readers will forgive me. After all, at the darkest point in the calendar, a bit of gardening is a good way to spend the few daylight hours that are available.

This morning, the tail end of windy, stormy weather gradually passed over the Cotswolds; meanwhile, the tail end of a short-lived head cold gradually passed out of my sinuses. The sun rose on both Witney generally and my brain specifically, and—having unfortunately missed the Cogges big dig earlier in the day—I decided to potter in my own garden. Once you start, it's surprising how many jobs you can find to do, even in the depths of winter.

After the wind has scattered all the leaves and dead annuals, the temptation is to tidy up a bit too much: beneficial insects and small vertebrates can be hibernating in wood piles and other bits of rubbish. So I avoided moving too many things, but the remnants of the late-flowering Clematis jackmanii "superba" had to be pruned back hard—it was starting to put on new buds on its big, bushy growth—as did the stalks of Iberis sempervirens; and I also removed the carcases of pelargoniums and chamomiles, which were liable to rot as much as help hide hibernating creatures.

Even in the depths of winter, some things were starting to grow, and so I also brought some of the tubs of bulbs closer to the house: the daffodils we dug up when we prepared the mixed border last spring, and can't seem to kill; plus Iris "Katharine Hodgkin" we got from Kingston Bagpuise House almost a couple of years ago. It's not the best time of year to do it but I took a chance on pruning the ceanothus and cotoneaster which were starting to block the back door, thus allowing me to actually get the green bin full of clematis etc. out!

Finally, I assembled a small trellis of twine and canes to support our overwintering broad beans: 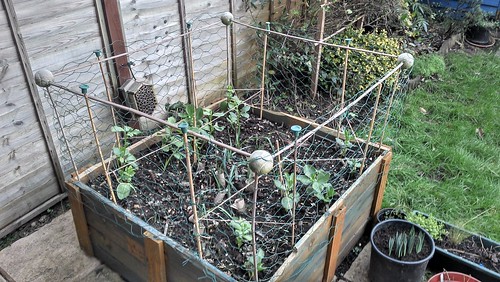 Ignore the cage with the tennis balls: they've been there for ages as part of the raised bed. Then you should be able to see eight other upright canes, permitting a zigzag of twine to cover the whole of the two strips of broad beans: Aguadulce Claudia (left) and The Sutton heritage variety (right). The Sutton is OK at overwintering but not amazing: I've already lost one to damping off because of the wet conditions and pest damage. I've been told I could try planting a new one and it will germinate, but we'll see.

The last thing I did was to put rubber tops on all the canes, to stop myself poking my eye out. As I did so, ironically I caught my (by that point ungloved) hand on a staple in the plastic pack of cane tops and received my first gardening injury of the year! Safety first, eh? A bit of Savlon cream and a plaster later and I'm right as rain. In fact, when Kate came back from the shops, she said "you've cheered up since you went outside." I think she's right.

It sounds like you had a very productive few hours in the garden J-P, and it helped your spirits too.

I try not to tidy up too much myself, but recent winds ruined my beautiful 'dead' grass flowers, with parts of them strewn all over the place, so pulling the rest out and composting them was the only choice. And because it's so damn mild, I've been having to cut things back as new growth is already coming through. There is still plenty of places for the creatures.

You really can sow more broad beans now. In deep frosty and snowy winters you couldn't, but it's just so mild this winter than it really is ok. A couple of my The Sutton got chewed on so I sowed some more a couple of week ago and they germinated really quickly. The broad beans you have in your pic are looking really healthy. I like your system of putting in the supports for the broad beans early - I must do that myself.

I remember you buying Iris "Katharine Hodgkin", so it's nice to know it's still going.  Maybe it will be flowering when we visit?!

Thanks, Julieanne! Yes, I'm glad I cut everything back. As with every year, at the point of cutting back the clematis, I end up cutting away wood with loads of new buds on it. But as with every year, I bet it will bounce back like dynamite in the spring. The Plant They Could Not Kill!

Regarding the beans, they were actually starting to flop and corkscrew, so maybe not as early as you think! If I get a chance I'll poke another seed of The Sutton in there over the next few days and see what happens.

And I don't know about the iris: last year it had lots of spikes but very few flowers. This year there are again a few robust spikes already, but.... I did top-dress both years after flowering, but maybe they're just crowded. After they die back this season I'll re-pot.