Last week I visited RHS Wisley, the flagship garden for the Royal Horticultural Society. It was open for free, as part of National Open Gardens Day (itself part of National Gardening Week.)

I took nearly 70 photos, which Flickr has uploaded in a random order (as usual) so I'll try to pick a few here that best illustrate the day.

We started on a smashing guided tour that took in almost all of the central site. If you do the same yourself, make sure you get a tour guide with a good, loud voice! 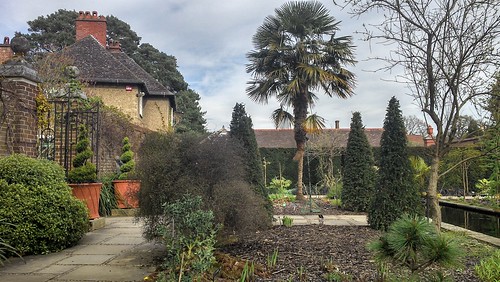 The foliage garden, containing as many examples of weird foliage as possible (see the Colletia paradoxa to the bottom right of the left path.) 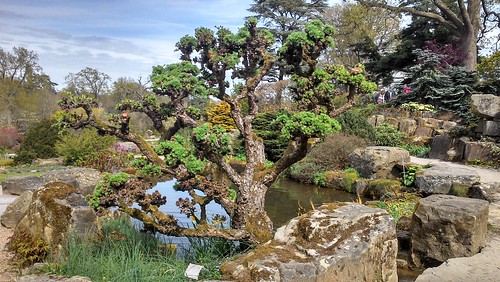 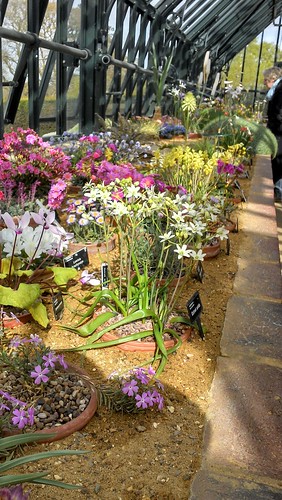 The contents of the alpine house (more of which later) plunged into sand beds. 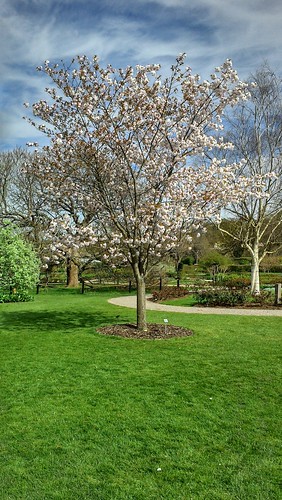 This Prunus "Ichiyo" in the otherwise rather dormant Bowes-Lyon rose garden. 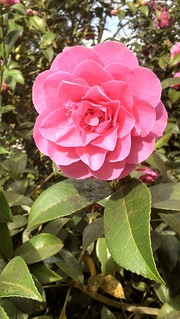 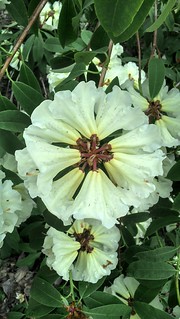 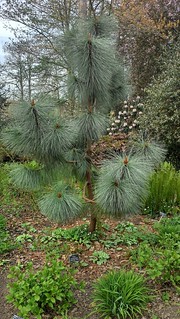 The wilds of Battleston Hill, with its acid soil well suited to, left to right: Camellia x willamsii "Debbie"; Rhododendron irroratum ssp irroratum; and an interloper from up north: Pinus montezumae "Sheffield Park". 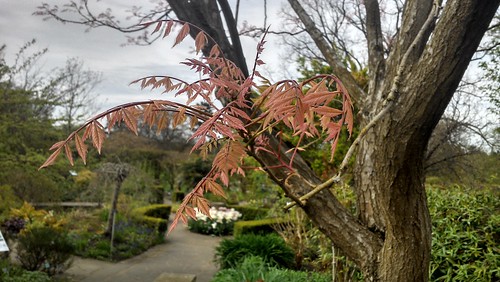 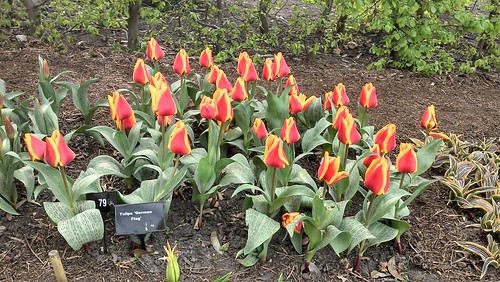 Tulip trials near the model and herb gardens: more on these later too. 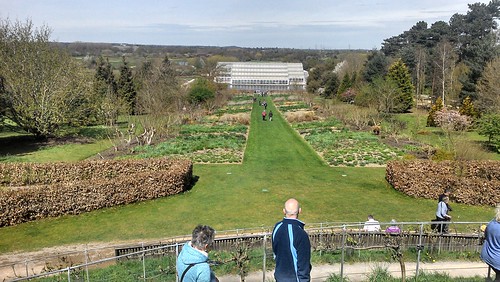 From the top of the spiraled hill of apple stepovers, a view northwards across the prairie gardens, to the end of our tour at the Glasshouse. You can see the exposedness of much of the site to north winds here.

The tour finished at the bottom of the hill, by the Glasshouse. Next to it was a cafe, where we had a spot of lunch and worked out what to do next. We'd seen so much in passing, but really wanted to go back and do certain areas justice.

While we were there, we had a wander round the Glasshouse. It was well arranged, with vertical structure and eyecatching vistas, and well planted too: 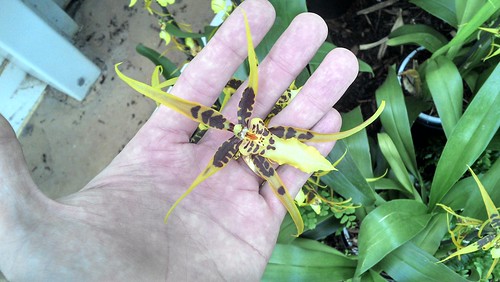 There was an exhibition of orchids; a fussy plant, so I appreciate it when others take care of it for me. 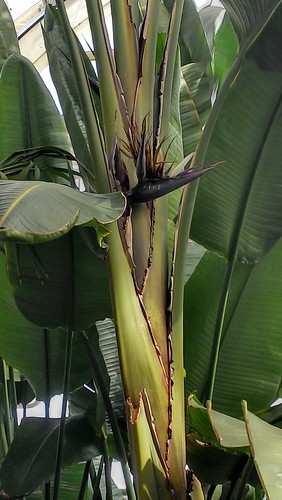 A tall relative of the Bird of Paradise, I think this was Strelitzia nicolai, towering over my head. 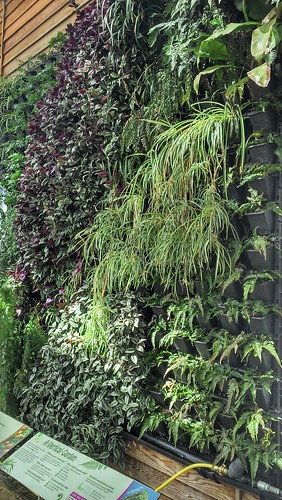 This vertical gardening kit permits regulated irrigation of any green wall, and modular planting in pots. A lot of plastic, though. 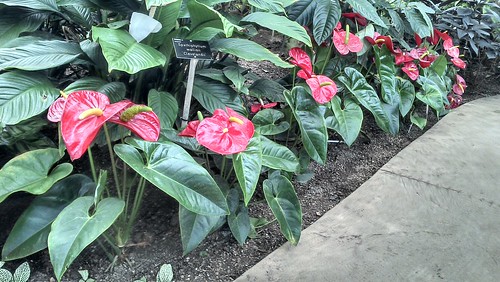 The sign among these impressive banks of arum lily, planted like bedding plants, refers I think to another plant! 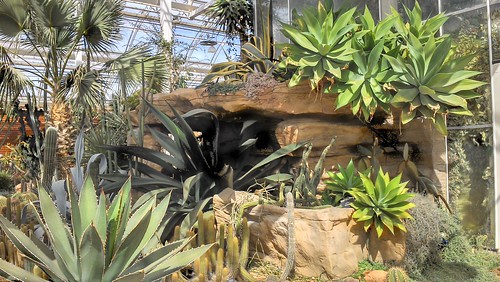 Good use of vertical space, with aloes and agaves spilling out over rocks.

During the tour, we realised the group wouldn't spend anywhere near enough time here for our liking, so we agreed as we were being whisked through to go back later for a closer look. Here's what we saw when we did: 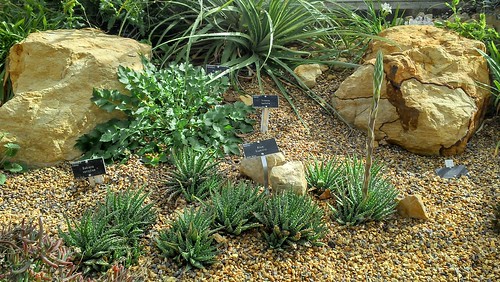 Flower spike on Aloe humilis, looking for all the world like asparagus! 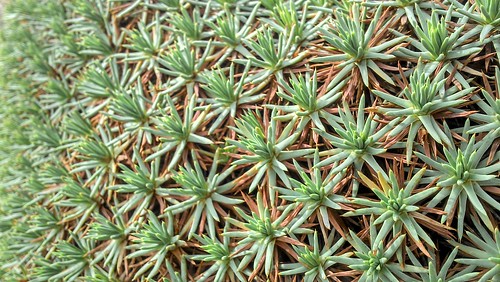 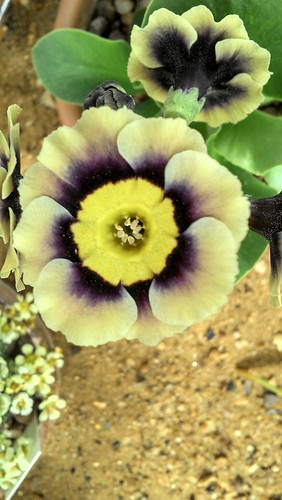 Primula auricula "Sirius", seen from above. 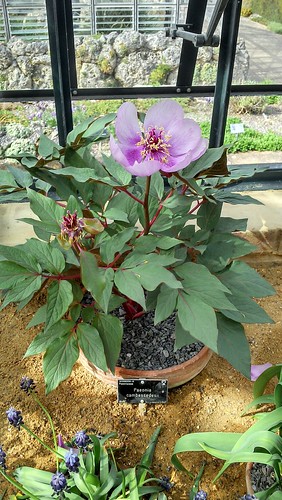 Paeonia cambessedesii, or the Majorcan peony. 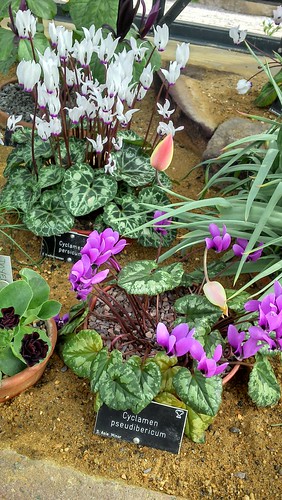 Cyclamen persicum and pseudibericum side by side, showing the pink in the white and the white in the pink.

There's a few more pictures from the alpine house on my Flickr album, so I won't add any more here; instead, let's move on to....

Wisley are currently hosting a tulip trial open to visitors. 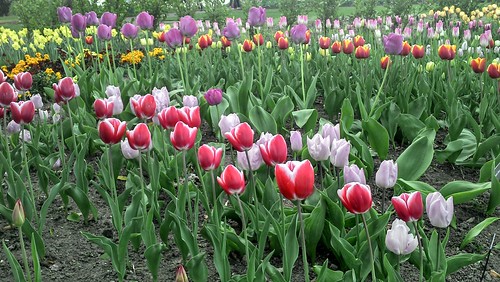 This meant there were long borders with—unusually for tulips—clearly demarcated square plantings of individual tulip species. 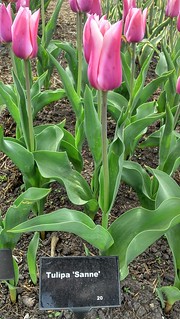 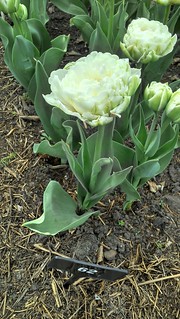 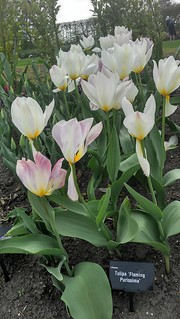 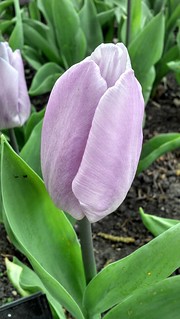 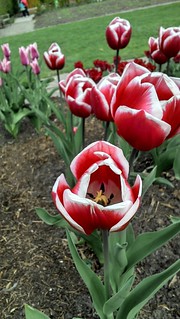 There were so many others—including German and Spanish flag—but so little time. There are a few more photos on my Flickr feed, but eventually we realised it was getting cooler, and quieter, and it was sadly time to head home.

Wisley is a very functional garden, and its primary function is horticultural trialling for the RHS. As such, it has grown pragmatically, established fiefdoms, and nowadays sets a lot of space aside for the essentials of ongoing trials. That makes it less of a coherent garden in the traditional sense, and more of a set of gardens, laid out partly scientifically, partly as inspiration.

What I mean by that is, like any planted site, Wisley has "rooms", but vistas leading people from room to room are less of a priority than ensuring there is enough space for function. This is fine, though, and with such a huge site I don't see what else you could do. As it is, each room (especially the wilds of Battleston Hill) is something you can get lost in for perhaps hours on end. Unlike ornamental gardens, Wisley doesn't need to entice you into the next room: you're going to want to go there anyway.

Although we visited most of the central site, we didn't see half of what we wanted, and if geography and public transport permits (connections are pretty dire, compared to the effort put into shepherding and siting car traffic) we'd certainly love to go back again some day. Wisley rewards multiple visits, for inspiration, for education or just for a fun day out among beautiful plants.